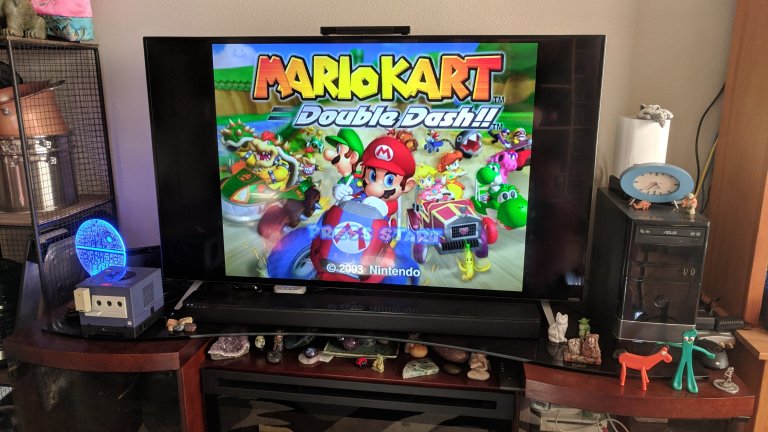 As a retro gamer I’ve spent way too much on cables and adapters to play older systems on my modern TVs. Most are too good to be true and a few work but not as promised. Granted if I had the room a 27″ CRT TV would be my choice, but the struggle to get old games to look as good as you remember on modern TVs is real. Now at least one console, the Nintendo GameCube can come down off the shelf and sit beside our PS4 on the TV stand. That’s all thanks to this little device from EON, the GCHD.

What I think is so special about the GameCube is that it was Nintendo’s last straight up game console. This was before the Wii, WiiU, and Switch, and marked the last time Nintendo competed with Sony and Microsoft on the same playing field. Competed and in some instances beat as the GameCube had superior hardware than the PS2 and pretty evenly matched the Xbox.

I bought my GCHD at the Portland Retro Gaming expo but you can find them on Amazon. (Actually, I hope Amazon restocks soon.). Now you do need the original model GameCube with the separate analog and digital out. The GCHD has been designed to snap into both ports.

It takes a bit of force, but once you hear and feel the click you’ll know it is seated properly. It will output a 480i signal, and for the games that support it, a 480p signal. There is no upscaling to 720 or 1080 but what you get is a 100% lag free experience. This is one that just works and works well. My games never looked so good on my 55” tv. If you still have a GameCube you owe it to get the GCHD.